A Complete Guideline to NLD Block & Its Treatment

The lacrimal gland is located in the upper outer portion of each eye. It helps to produce tears. There is a small tube that stretches from the eye into the nose and it is called tear ducts or Nasolacrimal Ducts (NLD). It causes draining of the tears from the eye to the nose. If the opening of the duct is obstructed or fails to open correctly where there are tears to drain from the eyes, there might have a case of a blocked duct. When the tear duct is blocked, the tear duct sac fills with fluid and there is a chance to become swollen and inflamed or sometimes infected. 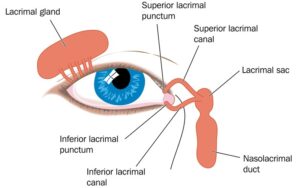 How is Allergic conjunctivitis treated?

NLD Block is very common in babies. The most common reason is the failure of the thin tissue at the end of the tear duct at the time of opening.

There are some other minor reasons for NLD Blocks in children including:

Not only in children but NLD Block is also seen in adults too. There may have a lot of reasons. They include thickening of the tear duct lining, nasal or sinus problems, infection, growth of tumours, bone injuries, tissues around the eyes such as cheekbones and so on.

Excessive tearing is the first symptom of NLD Blocks. It ranges from a wet appearance of the eyes to tears rolling down the cheeks. If a baby carries these NLD Blocks, it will be visible within the first few days or the first few weeks. If you see any redness in the eyes or swelling around the eyes or noses, there may be a case of an infection occurring in the eye’s drainage system. Though there is a chance of having yellow mucus which causes the eyelids to stick together. In some cases, this infection spreads to the eyelids and the areas surrounding them.

An upper respiratory infection, such as a cold, or sinus infection worsens the symptoms of a blocked tear duct. And these symptoms become noticeable after exposure to the wind, cold or sunlight.

With a thorough physical exam and after checking medical history, a blocked tear duct can be diagnosed. This diagnosis can help to measure the number of tears or to see whether the tears are draining normally from the eyes. Here you have to go through some other tests which will help you to find out the place of the blockage and how it was caused.

Diagnosis is depended on the symptoms and the cause of the tear duct blockage would be identified by this. There are types of tests which is determined by the patient’s age and symptoms. When the doctor determines the presence and extent of tear duct blockage, they use a fluorescein eye strain to check the drainage of tears. Then an orange dye is kept under both the eyes by a dropper or blotting paper. Then it covers the surface of the cornea. After a while, blue light is shown on the eyes so that it can detect abnormalities of the cornea as well as the delays in tear drainage.

If the problem has arisen after any injuries an internal examination of the nose may be indicated. Imagining tests and x-rays are also recommended so that they can rule out other causes like tumours and other diseases. A fluid is irrigated through the Nasolacrimal drainage in adult patients. It is used to determine and locate the extent of the blockage.

Like other diseases, treatment is based on the symptoms, its cause and the age of the patient.  If this problem has arisen after any infection, it is treated first. At first, a doctor prescribes antibiotic eye drops or ointment and then he goes for further treatments.

A gentle massage to the area between the eye and nose is given if the blocked duct happened to an infant. Several messages in a day help a lot. It is sometimes self-resolving why this simple massage technique. It helps to open a blockage or move a blockage. But a surgical procedure is needed when the tearing is persistent beyond one year of age and that same eye is infected.

In adults too, the cause of the blockage should be determined for further treatments. Further treatment is necessary in case an infection clears and the duct remains obstructed or the infection recurs. In many cases, a duct re-opens by placing a small probe into the duct. If it is unable to remove the obstruction a silicon tube is inserted to maintain an opening. In the case of children, a doctor suggests keeping that tube in place for 6 to 12 months, until the tear duct stays open on its own. Then a second procedure is followed to remove them.

If the conservative measures fail to cope with the problem, the doctor recommends dacryocystorhinostomy which is the creation of a new passage for tears to flow. This process can be performed in hospitals under general anaesthesia by Oculoplasty specialists. You can contact Indovision Cataract & Laser Eye Centre, Pune.

An artificial duct can surgically be implanted if the primary method doesn’t work. That artificial duct is called the Jones tube. If needed, it is placed behind the inner corner of the eyelid so that it can drain tears into the nose.

Tumors or nasal polyps that create obstruction are removed by surgeries.

Tear duct obstruction is sometimes unpreventable. The patient must take some safety precautions while playing contact sports or performing other physical activities so that any traumas can be prevented. If there is an eye infection or nasal trouble, prompt and adequate treatments are recommended to reduce any risk factors.